Building a Bit of Buzz. . . .Cynthea Masson's The Alchemists' Council. . .

While it wasn't my first book of the new year, Cynthea Masson's The Alchemists' Council arrived in the first parcel of 2016. I'd been excitedly anticipating this Advance Reading Copy for a few weeks, quelling my disappointment when the key turned, the mailbox door swung open, and  . . . no package yet from ECW press. Finally, though, it arrived, and I sunk into my favourite reading spot by the woodstove and started turning pages. After all, I've been following this book's progress for several years now,  admiring the way my former colleague and good friend Cynthea managed to squeeze time for writing it from a relatively heavy teaching schedule. 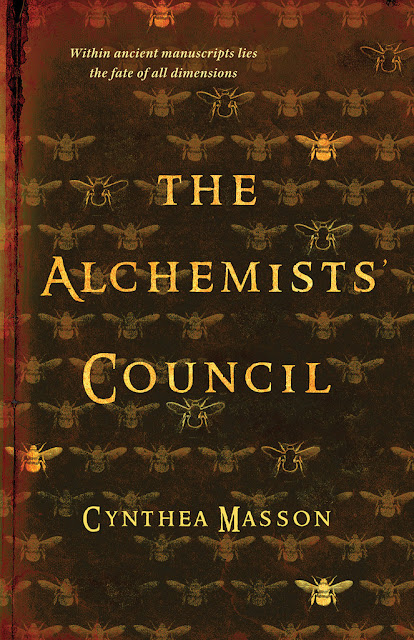 As I say, admitting to my investment in this novel, Cynthea is a good friend and a former colleague of mine. She's a medievalist and my field is Canadian Literature (not so much medieval here!), but we found common ground about ten years ago in our shared love of,  and admiration for, the television series Buffy the Vampire Slayer and Angel. Led by Cynthea, I extended my knowledge of Joss Whedon's work by watching the television series Firefly and Serenity, the movie that tied up the narrative after the space-western series was cancelled. We were excited when Dollhouse came along, something we could watch in real time and discuss fervently as our paths crossed between classes, and disappointed when it, too, was canceled too soon.

Through our mutual admiration of Whedon's work, I first learned how well Cynthea wrote, as I read papers she prepared for presentation at various scholarly conferences on popular culture (she has published in her original field, as a medievalist, but I'll admit I haven't read those articles).  We even presented at the same conference one year, where I was so chuffed to see her give the keynote address. ( Three times, she's received the most prestigious award in Whedon Studies; her work is often cited in popular culture studies; and she's co-edited several texts in the field as well.)

All of this to say, you should understand, that I was very nervous about accepting the invitation to review her book.  I've reviewed several friends' book before,  but that was after reading them, knowing I liked them, and happily saying a few words here (click on label/tag "writer friends" at the bottom of this post for examples). I've also previously agreed to review a friend's yet-unread manuscript, and written that response with concern and diligence and enjoyment, but little to no anxiety. I was solicited, and I wrote, as a scholarly peer working in a closely related field; my task was thus more straightforward -- to determine the scholarly research's value for acquisition by an academic press. This request -- to read and review the first of a trilogy of fantasy novels for an audience of more popular reading -- raised more anxiety. For all that I admire Cynthea's academic work, for all that I marvel at the way she manages to deliver scholarly ideas and research in entertaining prose, writing fiction is an entirely different enterprise. As well, I'm not a big fan of fantasy writing, although I've enjoyed stellar examples of it (Tolkien, Rowling, LeGuin, the usual suspects). I'd read Cynthea's first novel The Elijah Tree (Rebel Satori Press, 2009) and enjoyed it, but The Alchemists' Council was a considerably larger work, the first of a trilogy, and I knew it represented a much bigger investment to/for my friend.

I wonder if you heard the huge sigh of relief, then, several weeks ago, as I began turning pages. . .  Because I'm happy to report that I've had great enjoyment in the world Dr. Masson created, and I think you might too. Let me count some of the ways . . .


First of all, let me say this is a book to geek out to. The first 80 to 100 pages demand some concentration and effort as we familiarise ourselves with the terms of this new world, the rules, the hierarchies, the characters. But in the next 100, even as plot takes over and sweeps us along, there's pure delight for those of us who recognise the playful use of botanical names, for example. If you have any Latin at all,  or a solid grounding in botany or horticulture, you'll be making connections and high-fiving yourself (um, did I mention "geek out"?) but even without that classical language or garden lore, you'll have fun connecting names to colours to plants.
I found particular sly pleasure in seeing traces of my ex-colleague's experience in the classroom and with marking essays, chuckling, for example, when one character remarks to another, "I prefer the version without the sentence fragments."

And above all -- and again, this is where lovers of fantasy geek out -- the metaphysics and physics of this parallel world intrigued me. Different from science fiction, of course, yet with hints of the possibilities of quantum physics, not to mention, most obviously, the fascination that chemical transmutation through magical knowledge (or is that knowledge of magic) has held on human intelligence for centuries (and as a medievalist, Professor Masson is well-versed in this fascination).  Fantasy doesn't hold the same burden of credibility as science fiction does, but a reader's "willing suspension of disbelief" sags quickly in the absence of consistency, and The Alchemists' Council has clearly been plotted and written on a very solid foundation. I suspect there are maps and guidebooks (lists of customs, history, hierarchies, legal code) Cynthea could open and unfold for me, showing me where this particular portal or that is situated, both in our world and that of the alchemists. The same kind of underpinning, in other words, that one sees in appendices of Tolkien's books, senses in Rowling's Potterland, intuits in C.S. Lewis or Madeleine L'Engle.


Not that I'm necessarily saying that The Alchemists' Council is in a league with these other fantasies. Early days yet, and we're only one volume in. But by the end of this first novel (which, yes, stands quite well on its own in the meantime), we have some characters that we empathise with, some we are impatient with or mistrust, others with whom we sympathise but whose choices we question, and some who capture our curiosity.  Sacrifices are made, and some serious mistakes. Tension between wisdom and experience, on one side, and idealism and youthful energy, even (exploitable) innocence on the other drives a plot that illuminates character, and I'm looking forward very much to watching some of these characters -- Jaden, particularly -- develop over the next two books in the projected trilogy (I believe the second is being edited at the moment).

And finally, beyond the character development, I want to know what happens, not only in the world occupied by The Alchemists' Council, but in our world, where the consequences of the alchemists' actions are played out (and from where the initiates are recruited, their removal from family, friends, school, or work balanced against the possibility of immortality, power, and knowledge). The ecological ramifications of human free choice are cleverly signified through the novel's emphasis on bees, their disappearance from the pages of important alchemical manuscripts linked to their disappearance in "our" world. Reflecting current ecological realities in our world, the disappearance of these bees threatens the possibility of righting elemental imbalances. What makes this connection between fantasy and reality powerful is the connection the novel makes between human choices and ecological disasters -- and the ethical question it poses about possible political responses.  Without divulging too much, suffice it to say that rather than a straightforward tension between Good and Evil, Masson's fantasy requires us to consider ethics and politics from a more complex perspective. At what price, free choice? How much might we lose in the name of security and that which most of a community holds as Good? What is the value of a Flaw? How preserve that value when it's not yet perceived by more than a (threatened) few?
I haven't even mentioned another pleasure I found in these pages -- the emphasis placed on books and words and libraries, on the importance and difficulties of recording history and trusting memory (an emphasis Buffy fans might remember from that series). This readerly pleasure in respect for the written word is echoed as well in the pleasure I took in the book's editing. Although I did catch one small copy-editing error, for an Advance Reading Copy -- i.e. not even the final version to be printed -- this book is remarkably free of the distractions too often found in books from even quite reputable presses these days. Given how often I complain about #editingfails (particularly in one of our national newspapers!), it seems to me that credit should be given when these are noticeably absent.

By now it should be clear that I enjoyed The Alchemists' Council very much. Given that Cynthea is my friend, and I also guard the integrity of my reviews,  I don't mind admitting that was a huge relief. I will also say that I stopped numerous times throughout reading simply to marvel that this entire world -- history, laws, geography, physics and metaphysics, people with rich characters and friendships and memories -- all this came from the imagination of someone I know well. She made this up, from whole cloth as it were. Astonishing that we might ever take fiction for granted, really.  I hope that you might get a chance to visit the world my friend and ex-colleague created -- here's the ECW page where you can read more about the novel and even pre-order a copy if you'd like. It's due for Spring release, so you'll have to be patient, but I'll remind you again when it's available.  After all, we could all use a little alchemy in our lives!

Posted by materfamilias at 10:58 AM

How extraordinary! The book (I am intrigued!) and the review!
Dottoressa 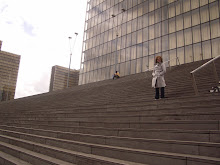